Information for foreign and nonresident participants

For the guests of the Congress we publish a small information on how to get to the venues and hotels from the Minsk airport and from the railway station of the capital of Belarus.

Minsk Airport is a compact complex with clear navigation. Going out of the arrival hall, the passenger sees a bus stop in front of him (roads in front of the airport are laid in a semicircle, as if in the form of a “horseshoe”, and the stop is located approximately in the middle of this “horseshoe”). From here, the shuttle bus No. 300E and the fixed-route taxi No. 1400-TK are sent. The bus is the only one. But if you choose to take a route-taxi, remember the number 1400-TK, since there is another one, which follows a not very convenient route.

The bus leaves approximately every 40 minutes. A route-taxi is sent between the buses.
The ticket costs about 4 Belarusian rubles (about 2 dollars, 120 Russian rubles). It can be purchased at the ticket terminal in the airport building (near the exit) or directly from the bus driver. Please take care of having small Belarusian money (at the airport, of course, there is a 24-hour exchange office).

Bus number 300E and minibus No. 1400-TK follow the highway to Minsk and then along the central avenue – Nezavisimosti Ave. – to the central part of the city, where the central bus station is located near the railway station. The journey time from final to final is about 1 hour, early morning is faster. On the route you pass through the urban area of ​​Uruchye, then the East, the Chelyuskintsev Park area, and then the Academy of Sciences (the road goes past the building where the registration of participants and the plenary session of the congress will take place), the area of ​​Yakub Kolas square, Oktyabrskaya square, then passes the hotel “Minsk “, through the central square of the city – Independence Square with the Government House, and turns into a railway and bus station.

If you are going directly to the Presidium of the National Academy of Sciences of Belarus or to the “Minsk” hotel, ask the driver to stop at this place, and he will kindly fulfill the request (just in case after entering the city line, remind him about yourself). If you go to the hotel “Academic”, exit at the intersection of the avenue with Surganova Street (so tell the driver), then follow the diagram that is on this page. To travel to other points of the city, it is best to go down in the metro. The nearest metro station to the airport is “Uruchie” (tell the driver “stop near Uruchie metro station”).

The Minsk railway station is located in the very center of the city, connected with the first subway line by a system of pedestrian tunnels, and a dozen routes of buses, trolleybuses and trams at the station square.

Having got off the train, it is necessary either to go down to the ground passage under the tracks, or to climb the travolator to the above-ground waiting hall. Please, keep in mind: in order to get to the metro and most of the transport, you need to go to the veryside of the station, where you can see the towers – “the gate of Minsk” – built in the style of classics, and a tall modern building with a glass facade. If you go to the opposite side, the transport will only be in the south-western part of the city. For signs, see “Exit to the Railway Station Square”.

From the underground passage you can, without rising to the surface, reach the metro station “Ploshchad Lenina / Lenin Square” at the signposts. From the above-ground waiting hall, you can go down there, first along the escalator to the ground level, and then down the stairs even lower into the transition. Or go outside through the central entrance of the station and turn left (see diagram).

The metro station “Lenin Square” is on the same line as the metro station “Academy of Sciences”, at the exit of which the building of the Presidium of the National Academy of Sciences of Belarus is located, and near the buildings of the Institute of Philosophy, the Institute of History, the Central Scientific Library. In order, for example, to go to the Faculty of Philosophy and Social Sciences of the Belarusian State University, it is necessary to make a transfer at the Oktyabrskaya metro station to the second metro line (the steam station is called Kupalovskaya) and go to the Frunzenskaya metro station.

If you stay at the “Minsk” hotel and you do not have heavy baggage with you, there is an opportunity to go there from the station on foot. The road through the Mikhailovsky Square and past the picturesque Independence Square with the “Red Church” and the underground shopping center will not take more than 15 minutes. The route is shown in the diagram.

On the services of the railway station, you can read on its website .

Sorry, this entry is only available in Russian. For the sake of viewer convenience, the content is shown below in...
22.11.2017

Photo gallery of the First Belarusian Congress of Philosophy

Our photo correspondents recorded memorable moments of the First Belarusian Philosophical Congress "National Philosophy in the Global World." Some photos...
19.10.2017

Sorry, this entry is only available in Russian. For the sake of viewer convenience, the content is shown below in...
14.10.2017

Work program of the First Belarusian Congress of Philosophy

In the program of the First Belarusian Congress of Philosophy, "National Philosophy in the Global World" – over 630 reports...
07.10.2017

Where to stay in Minsk in the days of the Congress

According to the numerous requests of colleagues, we provide information on inexpensive hotels, where congress participants from other cities and...
28.09.2017 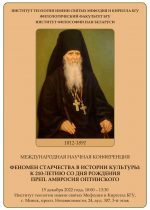 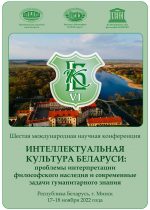