Institute of philosophy of the National Academy of Sciences of Belarus, Institute of Applied Mathematics named after M.V. Keldysh, Institute of philosophy of the Russian Academy of Sciences with the support of the Ministry of Foreign Affairs of the Republic of Belarus, Business and cultural complex of the Embassy of the Republic of Belarus in the Russian Federation hold the joint Belarusian-Russian scientific-practical conference “Designing the future and horizons of digital reality” on February 6-7, 2020.

Cooperation of Belarusian and Russian scientists has a long tradition and covers a wide range of scientific areas. In particular, within the framework of the conference, it is planned to discuss the results of joint scientific projects of the Russian Foundation of Fundamental Research and Belarusian Republican Foundation of Fundamental Research that were implemented on the base of the Institute of Applied Mathematics named after M.V. Keldysh of the Russian Academy of Sciences and the Institute of philosophy of the NAS of Belarus. The conference is focused on the analysis of results, risks, and prospects of development of digital society and economy of the Union State Belarus-Russia from the position of interdisciplinary synthesis of knowledge, which is formed at the intersection of philosophy, mathematics, computer science, economics, pedagogy and other sciences.

Digital transformation is considered as one of the most important drivers and the main vector of the global economy and the global information society as a whole. It has been the part of the national strategies of both Belarus and Russia for several years already. However, in conditions of the Union State Belarus-Russia and Eurasian Economic Union, it becomes more relevant to intensify the integration processes of the digital infrastructure of our countries, to move from a coherent digital policy to a single strategy within the framework of the above-mentioned unions. At the same time, the main imperative of the conference is the thesis “economy for human”, because this important aspect is usually overlooked when analyzing and designing the digital world.

During the conference, it is planned to discuss a wide range of transdisciplinary issues: economy of the digital world, blockchain technology, educational robotics, the art of a new era, management strategies for digital reality risks, socio-economic and anthropological consequences of implementation of digital technologies, transport systems that have become possible in computer reality, etc.

Problem field of the conference:

Scientists, university professors, doctoral students, and graduate students interested in studying and solving the announced problem field of the conference are invited to participate in the conference.

The conference will be held at the Business and cultural complex of the Embassy of the Republic of Belarus in the Russian Federation (Moscow) on February 6-7, 2020.

Materials of the previous conferences can be found at the site https://keldysh.ru/future/ 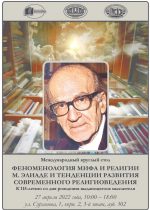